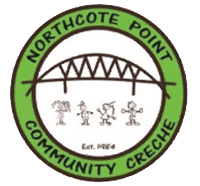 The Crèche has a long association with Northcote Point. It originated as a coffee group which started in 1981 meeting in local homes and then later the War Memorial Hall for a period of time. By 1984 the group had moved into the old Council Chambers/Library (the current Crèche venue) and was granted planning consent to operate as a morning Crèche which gradually grew to five morning and three afternoon sessions per week. The Crèche is based in a heritage building.